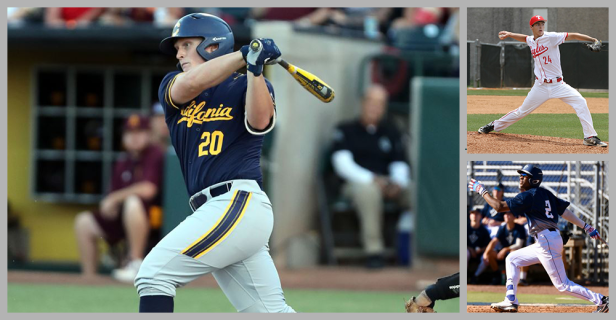 In their first season behind the draft table labeled Miami Marlins, Gary Denbo and the new Jeter regime brought a bevy or talent to South Beach, three of which have already proven to be top 30 prospects. Behind that trio is another group of draftees (Tristan Pompey, Nick Fortes, Chris Vallimont) which stands a very good chance of joining the top tier of organizational talent very soon. This season, although the draft table may look a little bit different, Denbo and Co. are in a fantastic position to match if not better that success.

#Marlins CEO Derek Jeter talking about the team’s approach going into next week’s #MLBDraft Says team is focusing on acquiring best available position player talent at the top of the draft. ⁦@TheAthleticMIA⁩ pic.twitter.com/NfDCKaPxEK

Owners of the fourth overall draft pick, the Marlins are in prime position to have their pick of the litter of many future faces of any franchise. From there, the Fish will pick at #35, a spot which has produced the current 19th overall prospect in baseball Taylor Trammell (2016) as well as All-Star Aaron Rowand (1998) and Johnny Damon (1992). The Marlins will then pick again for a third time within the top 50 picks at #45 overall. That spot is responsible for berthing the likes of Trevor Story (2011) and Jed Lowrie (2005).

Whom should the Marlins, at a crucial point in the rebuild, target with each of their first three picks? Herein, we examine. 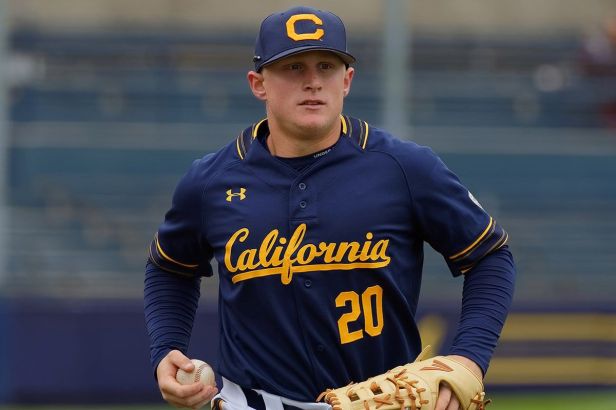 With Adley Rutschman, Bobby Witt, Jr and CJ Abrams projected as the first three off the board at this point in time, things get a bit more uncertain when the Marlins hit the clock. Both Vaughn and Vanderbilt outfielder JJ Bleday have the potential to be franchise-altering talents and both have offensive capabilities and tools to hit for both average and power. Given their similarities at the plate, the tipping point for us is where is the franchise thinner: corner outfield or corner infield? And the answer is simple.

As much potential as Vaughn showed to hit for average at the next level in high school via quick hands and wrists, scouts limited his ability to hit for power due to his straight-through swing plane and short stride through contact. An offseason later, Vaughn was doing this:

By tapping into natural raw power very few — including the Cal coaching staff — thought the sub-6-foot, sub-215 pounder was capable of and by adding loft to his swing, Vaughn added another facet to his game. In his freshman year, Vaughn’s 12 homers tied him with teammate and Marlins’ 10th round draft pick Denis Karas for the PAC-12 league lead.

“Andrew Vaughn is obviously one of the best players in the country. Really proud of what he did a year ago and after being with him for a year, not surprising,” Vaughn’s recruiter turned Stanford head coach David Esquer said after Vaughn’s breakout year. “He’s just a class act on and off the field. He makes people better because he kind of pulls people with him with his work ethic.”

Vaughn continued to answer questions about his size in his sophomore year when he more than proved the power outbreak wasn’t a fluke. In 2018, Vaughn entered University of California history books. He set a Cal single-season program record by slugging .819 and his .402 BA ranked third all-time by a Bear. Attending the same Alma matter as Chase Utley, Eric Karros, former Marlin Todd Ziele and Mr Marlin, Jeff Conine, Vaughn was named the first-ever Golden Spikes Award recipient in Cal program history and the first to do so in a draft-ineligible year since 1987 (Jim Abbott). He won the award over 2018 first-overall pick Casey Mize, 18th-overall Brady Singer and third-rounder Kasey Clemens.

“We couldn’t be prouder of the way in which Andrew represents our team and the University of California,” Vaughn’s Head Coach Michael Neu said at the time. “To see him recognized as the best amateur player in America speaks volumes about who he is, both on and off the field, and speaks to the incredible support he gets from a family that has been behind him every step of the way. It’s an incredibly exciting day for Cal and Cal Baseball.”

After proving his power isn’t restricted to metal bats by slashing .308/.368/.654 with five homers in just 52 ABs in the prestigious Cape Cod League last summer, Vaughn hit 385/.539/.728 line in his junior year this past season. In a single-season low in ABs, Vaughn tallied a career high 53 walks contrasted by just 30 Ks, bringing his collegiate career K/BB% to a ridiculous 0.62%.

What the 5’11”, 210 pound Vaughn lacks in size he makes up for by way of freakishly raw power, especially for a guy of that stature and a very advanced feel for making the most of it. By understanding situations, minimizing the strike zone and very rarely chasing too far outside of it, Vaughn, who doesn’t have to discount contact for power, owns one of the most complete offensive skill sets in the entire draft. Though he strictly played first base in college, Vaughn owns an explosive defensive arm that regularly reached the mid-90s from the mound in high school. During recruiting, scouts saw a future for him at third base. Though it would require attentive coaching and a lot of patience Vaughn is open to the possibility.

With modestly graded 60 grade power and contact, a 50-grade arm and defense, Vaughn is considered by some scouts to be the best prospect in the draft and, should he fall to the Marlins at fourth overall, an absolute steal. 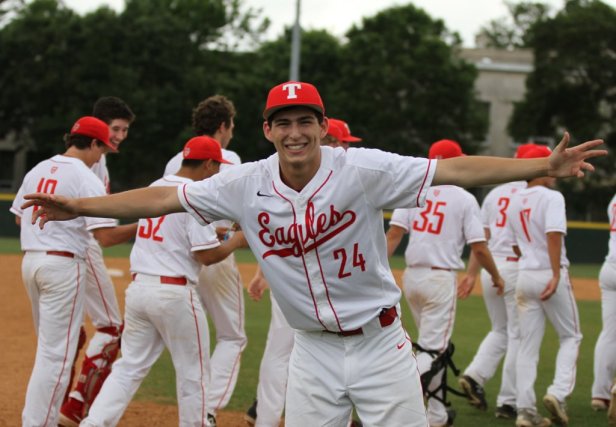 Thought for certain to become an honoree of his commitment to Texas A&M before the beginning of his senior season, Wolf turned scouts’ heads toward him once again when he reached 97 in his first start of the year. After parlaying his newly recognized velo into a lights-out season, Wolf has vaulted himself into late first round/early second round selection merits.

Standing 6’2”, 165, over ten pounds heavier than he was in his junior season, Wolf coupled his added size with a lower arm slot in order to gain over seven MPH worth of velo on his fastball this past season. Along with a four-seamer that ranges from 90-97, Wolf also owns a knee-buckling, low-80s 12-6 curve. The 19-year-old’s distant third pitch, yet one that is already flashing plus, is a mid-80s change. When at its best, the work-in-progress pitch shows good fade and sink.

A guy who already adds and subtracts from his wide velo range effectively and a guy who has shown the ability to quickly grow in to added size by making positive adjustments, Wolf has shown poise and maturity well beyond his years, giving scouts a lot to rave about.

After quickly taking draft boards by storm this past season, Wolf is a guy who has done everything right. Should that continue, with room to add at least 20 more pounds of muscle mass, Wolf is a teenager with big things written all over him. Given Michael Hill’s recent past with taking a liking to prep hurlers, we wouldn’t doubt if the Marlins’ sights have been fixed on Wolf for some time.

With two plus pitches via great spin rates on his shapely change which ducks and dives and curve which has a nice 11/5 arc in addition to his huge fastball, Wolf already shows the makings of a future ace, reminiscent of Stephen Strasburg. While he also shows the effort in his delivery a la Strasburg and the need to gain the ability to repeat it in order to remain healthy and be effective at the next level, an outlook that would make some Marlins fans wary of selecting him this high, Wolf’s ability to match Strasburg’s velo as well as his advanced blueprint for two plus breaking pitches is well worthy of this selection by a franchise in the nascent stages of a rebuild that will give him no reason to rush. Given time, we place Wolf’s modest ceiling high: Gerritt Cole, a current 3.14 FIP hurler by way of a 1.17 WHIP and 3.94 K/BB% with room for more. 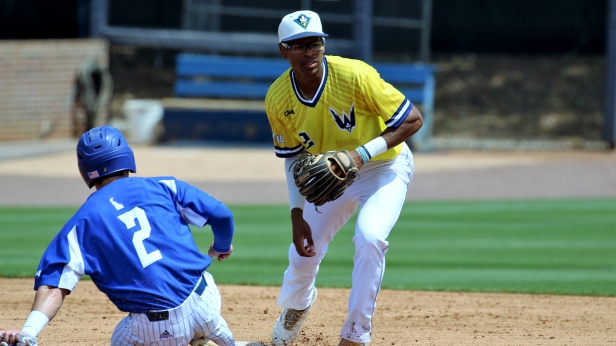 In Vaughn, the Marlins will acquire arguably the best all-around hitting talent in the draft. In Jones, they’ll reign in not-so-arguably the fastest player available this June.

Gregory Jones Jr. was born on March 7, 1998 in Cary, North Carolina where he attended the high school carrying his township’s name from 2013-2017. A varsity participant in each of his four high school years, Jones hit .355/.493/.496. Very early on in his baseball career, Jones’ calling card became his speed and voracity on the basepaths. In 79 high school games, the infielder terrorized opposing batteries, stealing 45 bags in 75 attempts (60% success rate). Ranked 75th overall in the 2017 MLB Draft by Baseball America, the two-time All-Conference, one-time All-Regional and All-American honorable mention was drafted by the Orioles in the 17th round. Jones forwent that selection in favor of honoring his collegiate commitment to UNC Wilmington.

“As a freshman, I played a pretty big role,” Jones said. “It was either step up or get left behind. I chose to step up. That just shows what I can be this year.”

What could Jones be this past year? How does a .343/.491/.551 hitter and 40 base stealer sound? By leading the Colonial Athletic Association in OBP, steals, runs scored (69), triples (9), hits (74) and walks (53) as well as ranking second in BA and fourth in SLG all while seeing the second most plate appearances in the league, Jones was named the CAA Player Of The Year. Jones also appeared on national leaderboards with the third most triples and sixth most SB. All of this has pushed Jones up into the conversation to become a late-first round choice and, at the very latest, an early second round selection.

Watching Jones hit, his approach screams future lead-off hitter. Approaching from deep in the box, Jones views the strike zone extremely well, forcing his opposition to come to him. The weak point in Jones’ game at present is his swing. Although he flashes the bat speed necessary to succeed as a top-of-the-order contact/speed-first threat, the hack shows the susceptibility to get long, limiting him to weak contact, easy outs and, in the past, swings and misses. Via this hole, Jones’ hit tool has been limited to a sub-50 grade and kept him out of the conversation involving early first round selections. That said, Jones made huge strides last year in the area of whiffs while continuing to grow into his body. Given proper time to fill out — which the rebuilding Marlins should have no problem giving him — Jones is a future catalytic threat capable of a Dee Gordon-esque ceiling.

Like Gordon, Jones is a natural middle infielder who could make the move to center field at the next level. While his natural raw speed allowed him to field the shortstop position decently at the collegiate level, scouts say Jones profiles better as a center fielder at the next level due to limited immediately readability of trajectory off the bat. Given that, Jones’ unquestionable ability to cover advantageous ground and then some would make him an immediate shoe-in to become Juan Pierre v. 2.0 in center, with the capability to grow into more.

Stay tuned to Fish On The Farm both here and on social media (@marlinsminors) on Twitter, Instagram and Facebook for continuing coverage of the MLB Draft all June long.