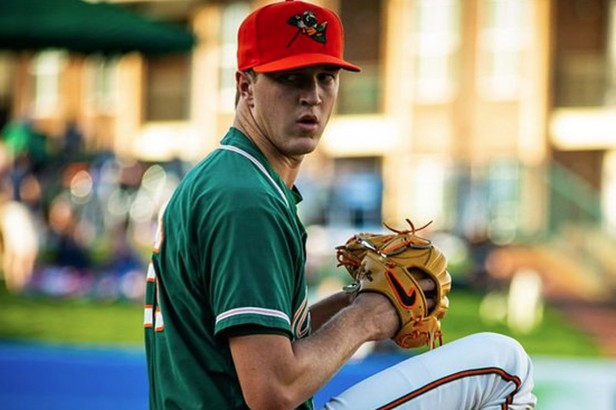 344 days. That’s how long Trevor Rogers painstakingly waited after going from being drafted by the Marlins in the first round of the 2017 MLB Draft to actually taking the field for an organizational squad in live game action. Finally, after a series of unfortunate events, Rogers has arrived.

Hailing from Carlsbad High in southern New Mexico, Rogers enjoyed a highly decorated amateur career. In his four year varsity tenure, Rogers held down a 26-5 record by way of a 0.73 ERA and a 325/52 K/BB. This included an 11-0, 0.33 ERA 134/13 K/BB senior year in which Rogers collected first team All-American honors. Touted for his great mix of size and easy mid-high 90s velo and advanced second pitch slider, Rogers forwent a four year commitment to Texas Tech to become the second straight prep hurler to sign with the Marlins out of the first round of the draft. The signing garnered the 18-year-old a $3.4 million payday.

For that success as well as the check, Rogers says he has plenty of people to thank:

“My coaches gave me all the tools they had to make me a better ball player. And course my teammates. They were always their pushing me to get better each day.”

Also amongst the individuals Rogers has gratitude for is his cousin, former Marlin Cody Ross. According to Rogers, becoming a member of the same organization as an elder member of his family hits very close to home.

“We talked a little bit, he just said to enjoy the process and that it’s an exciting time for me to be apart of this organization,” Rogers said. “Watching him when I was younger playing for the Marlins and now I’m in the exact same position, that’s really special to me.”

At the investment the Marlins made in him and with Rogers nursing a light forearm strain and with the recent stories of fellow hard throwing high schoolers such as Tyler Kolek and Braxton Garrett gone awry still fresh in their minds, the Marlins organization erred on the side of extreme caution with Rogers. The team balked at giving Trevor his first professional assignment and instead relegated him to an instructional league that was set to begin at the end of the regular season. However, the entire season was washed out when Hurricane Irma struck on August 30.

Finally, after the painstaking wait and after beginning the season in extended spring training, Rogers has made his pro debut. And he couldn’t be more excited.

“Man, it’s been a very long wait. It’s been over a year since I’ve pitched in front of a crowd,” Rogers said. “It’s so exciting for me to eventually take this small step of many throughout my journey in organization. I can’t wait for the late night games under the lights in front of all the fans.”

Regarding how he dealt with and spent all the time off, Rogers had this to say:

“Just making sure a stay healthy and really buy in with the throwing program and bullpens, slowly building up my innings throughout extended spring, doing arm care with the trainers and resting.”

Rogers’ first start was a bit up and down. He started off his first professional inning by striking out his first two hitters faced then proceeded to give up two runs on a walk and two hits. He then threw a wild pitch and committed a balk before recording a third strikeout to end the frame. Rogers allowed a lead off double to begin the 2nd but got around it and an HBP by getting an out three different ways: a groundout, flyout and a third K. Rogers allowed another man to get into scoring position without a swing in the 3rd, walking a man and allotting a steal of second base. The run scored on his final pitch of the game on an RBI single in which the batter was tossed out at second base.

In regards to his first start, Rogers admits there were some nerves and rust present but that overall, it was a life-changing event.

“Yeah, there were definitely a little bit [of jitters] but it was a great experience,” Rogers said.

The first inning of Rogers’ second start on May 28 would prove to be one of the rockiest innings of his baseball career. After allowing a leadoff double, the Hagerstown Suns loaded the bases on a walk and another HBP. Following a strikeout, Rogers gave up a single and a grand slam homer to back to back hitters. Following a mound visit, the Suns put two more men in scoring position on two singles and a steal but Rogers was able to finally stop the bleeding via two fly outs.

As unfortunate as that first inning was, what happened next was all the more encouraging. In his next two innings, Rogers proved he could have a short memory, put adversity behind him and settle down, setting down six of his last eight including three by way of the K.

“There was plenty of ball game left and the plan was to keep out there as long as possible,” Rogers said regarding the message during his mound visit in the 1st. “I finally got in the grove all my pitches felt good and placed them where I wanted to.”

While it hasn’t been the perfect start to a career in any sense of the word from the get go to the present, Rogers has shown the ability to overcome in many more ways than one, whether it be waiting out the chance to make his debut or a rough start to a game. On top of that, his reputation and stuff at such a young age speak volumes to his potential ceiling. Rogers’ calling card is his easily leveraged and well disguised velo that is made possible by use of his extra large frame. His bread and butter pitch is his 92-96 mph fastball with good sink but a recent change in mechanics that has allowed him to mask his slider better and refrain from tipping it has allowed the pitch to make leaps and bounds, getting hitters out in front of it and leading to many more swings and misses or at the very least weak contact. Rogers says this simplification and not overthinking the pitch has resulted in a better feel and more confidence in the pitch.

“I always struggled with the secondary stuff, more with the slider because I would alter my mechanics and try to make it break instead of accelerating through the pitch and having the grip do the work,” Rogers said. “It’s going to be a big asset for me going forward and becoming more of the complete pitcher that I always want to be.”

As we saw in camp, the Rogers slider can get downright nasty when he’s hitting his marks.

.@T_Raw1691 with a nasty three pitch K to begin the 2nd. Ended with a filthy slider in the dirt. #MarlinsST pic.twitter.com/Pkc4xjNwao

Rogers also owns an already average curveball and the beginnings of a changeup that flashes late fade. The development of those pitches will be a large factor in how high up his ceiling he reaches but given his ability to learn, adjust and show composure well beyond his years in regards to all he’s already been through, the sky appears to be the limit for this yet-to-turn-21-year-old.

Welcome to the pros, Trevor. Your next challenge awaits your conquering.