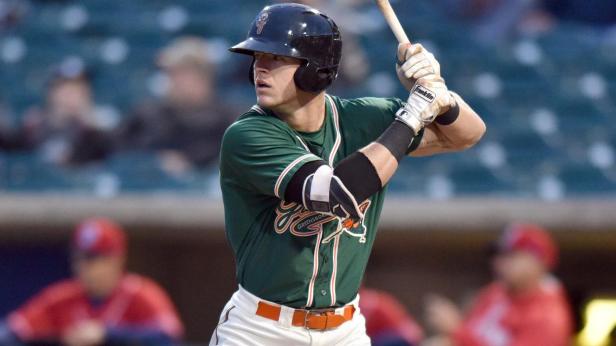 If you happen to make the pilgrimage through the small Central Florida town of Sorrento, you will hardly even recognize that you were there. However, in the near future, the baseball world is sure to recognize one of the town’s 765 residents’ names. That name is Colby Lusignan.

Lusignan was born in 1992 in the unincorporated township of Sorrento, a city that houses just 765 and encompasses just 1.3 miles. Because there are no schools in Sorrento, Lusignan was forced to make an 11.2 mile, 17 minute trip down State Road 46 every day to attend high school in Eustis. Being one of few out-of-towners at Eustis High, Lusignan admits his days there were a bit of a grind, but that staying close to both his immediate family as well as his extended baseball family stregnthened both his personal relationships as well as his professional relationships.

“High school days were pretty uneventful. I was a home body andjust liked hanging with the family,” Lusignan says. “Growing up in a small town where everyone knows everyone rraly makes you try to stay on top as well as respect the people around you.”

Upon his graduation in 2011, Lusignan made the decision to attend college at Sante Fe Community College, slightly upstate in Gainesville. Two hours away from Sorrento, it was not too far from home but it was just far enough for him to get the full college experience.

“Gainesville was one of the top junior college schools in Florida, and I just felt like it was the right place to go,” Lusignan said. “It was an hour and a half from home so I felt like it was far enough and close enough at the same time to be a college kid.”

After two years of placing within the top seven in OBP, the top 10 in SLG and the top five in BB/K, a combined 73 game span in which he slashed .329/.426/.488, Lusignan was recruited to Lander College in South Carolina. Depsite being as far away from his family and as far out of his comfort zone as he had ever been, Lusignan says making the choice to attend Lander was made fairly easily.

“The decision to go to Lander really was a family oriented decision in the sense that the coaching staff and community approached the team with that mindset,” Lusignan said. “Distance and not seeing loved ones is obviously not ideal, but knowing that they supported me chasing my dream, and that they made the trip to come see games made it much easier.”

Benefiting from the close relationships he had with his coaches and teammates including the one he had with his head coach Kermit Smith whom he describes as “a second dad who had great relationships with all the guys and made you feel very at home” and labels as a the leader of an extremely positive clubhouse whose “ideology spread through the other coaches and really made the team a close-knit group”, Lusignan hit .325/.429/.591 that season with the Peach Conference’s 10th best OBP, seventh best SLG and ninth best OPS (1.020). He also slammed the third most homers in the league (10) and drove in it’s eighth most runs (41).

With an overall .328/.425/.528 career collegiate line, Lusignan declared for the MLB Draft in 2016. He spent draft day back where it all started in Sorrento surrounded by his biggest supporters, his family and his best professional influences, his Lander coaches. It is those individuals that Lusignan credits most for having heard his name called. Selected in the 28th round at number 833 overall, Lusignan is just the eigth player to be selected out of Lander University. Even though he had to sweat out a lot of nervous hours waiting for his phone to ring that weekend and even begin contemplating his situation should he go undrafted, Lusignan recalls his draft experience as a picture perfect moment.

“Draft day was pretty surreal, spending it with my family who has been there all along was great,” Lusignan said. “My coaches at Lander were awesome, they really helped me develop my offensive game, and we had a really good team while I was there. Those two things really helped me to get exposure, and I’m proud that I can say I was drafted from Lander University.”

Not only was his draft day setting perfect, the setting of the result of his selection was nearly as ideal for the easily homesick 23-year-old. Being selected by the Marlins meant that Lusignan would spend time in the Carolinas, within a stone’s throw of his Lander coaches whom he could still look to for professional support and in Florida where moral support from his family would also be within very accessible reach. Asked what he thought of being drafted by the Marlins, Lusignan said his preference would not have had it any other way.

“It was exactly the way I pictured it to happen,” Lusignan said.

After beginning his career in the Gulf Coast League last season where he hit .319/.422/.469/.894, marks that ranked fifth, fifth and seventh and third on the circuit, Lusignan made the jump to full season ball in Greensboro this year. There, he has gotten off to a .299/.357/.442 start with a BA that ranks 26th in the Sally and an SLG that ranks 22nd. Most recently, he broke a 2-21 slump by going 5-5 with two doubles and three RBI. The five hits were the most Lusignan has recorded in a single game at any level he’s played at. In order to keep his current pace, Lusignan is learning to pace himself and let his body adjust to the rigors of, for the first time, playing 1,260+ innings in 150 days.

“I was fortunate enough to break camp with a full season club, and it will definitely be the most taxing year of ball on my body to date,” Lusignan said. “I’ve really been making sure to stretch and foam roll, and make sure to get enough sleep. Just overall body maintenance is something I think is super important to making it through a full season.”

Lusignan is a massive physical presence who menaces opposing pitchers as he stares them down from his 6’4″, 230 stature. He is growing into potentially plus plus power potential that scouts rank at a ceiling of 70 on the 20-80 scale. He owns a mechanically sound approach in which he maintains his looseness well and utilizes a big front foot timing trigger by which he transfers his weight all the way through the ball. Partnered with rotational energy from his back foot pivot and active hips, Lusignan gets the most out of his extra large frame.

Due to his size, Lusignan’s swing looks effortless and fluid but the deception in that is revealed when he makes contact and the ball absolutely flies off his bat. During his collegiate days, his power numbers ticked up with each passing year until he was ultimately hitting a homer once in every 15 ABs. Of course as he adjusts to much more staunch competition that figure will given and has already given way to a heightened K rate. In 77 ABs, Lusignan has struck out 25 times. However, with a 1.45 career NCAA K/BB and a 1.75 K/BB last year in the GCL, Lusignan shows the potential to be much more than an all-or-nothing power bat. With a great baseball IQ, he also exhibits the knowledge of what it will take for him to become an all-around offensive threat.

“I think that really sticking to my approach, and looking for what I want to hit will help to boost my walks, as well as tap into my power potential,” Lusignan said. “Staying within myself, not pressing and trying to make something happen will allow me to recognize pitches, as well as take a free smooth swing at pitches I think I can drive out of the yard.” 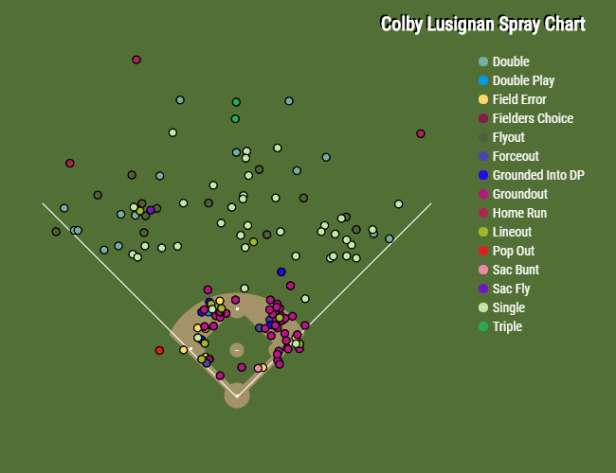 A look at Lusignan’s hit chart from the last two years will reveal that through excellent plate vision, good bat speed and the ability to fully extend his long arms, he distributes the ball evenly to all fields and can turn any pitch in the strike zone into a hit. Even though said strike zone is large due to Lusignan’s extra large frame and straight up and down stance, he covers the plate magnificently and selects swings just as well, making him a contact-first hitter with budding prodigal power.

If he can maintain the same plate discipline as he realizes his power potential, there’s nothing against Lusignan becoming a 20+ homer/20+ double hitter at first base, currently a very thin position for the Marlins’ organization. For those reasons, the 24-year-old Lusignan is a candidate to fast track through the rest of his minor league career and contribute to the Marlins by 2019. Not too  shabby for a small town kid with a dream.